Explore More Than Ever Before Through Dover Stone Church Preserve

Explore More Than Ever Before Through Dover Stone Church Preserve 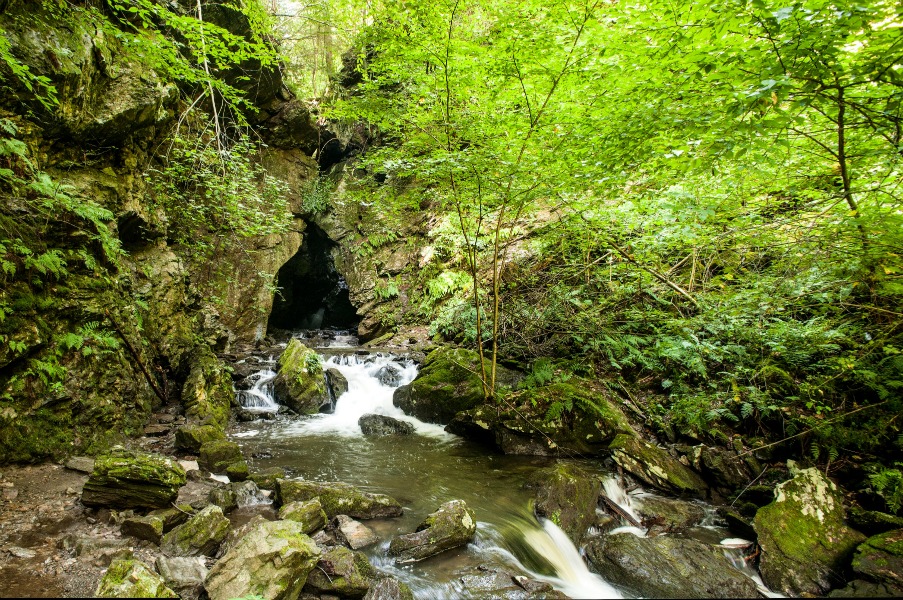 Dover Stone Church is one of the most spectacular natural sites in Dutchess County, New York. Volunteers of the New York-New Jersey Trail Conference were instrumental in building trails for hikers to explore the protected lands surrounding this hidden natural wonder.

Three new trails traversing the Dover Stone Church Preserve were officially opened to the public in June. Built by Trail Conference volunteers—including the Harlem Valley Trails Crew led by Salley Decker, volunteer supervisor of the Preserve, Town officials, and the staff of Dutchess Land Conservancy—the new hiking paths add four additional miles of trail to this historic green space in Dover Plains. Prior to their completion, only a fraction of the Preserve was accessible via just one marked trail. 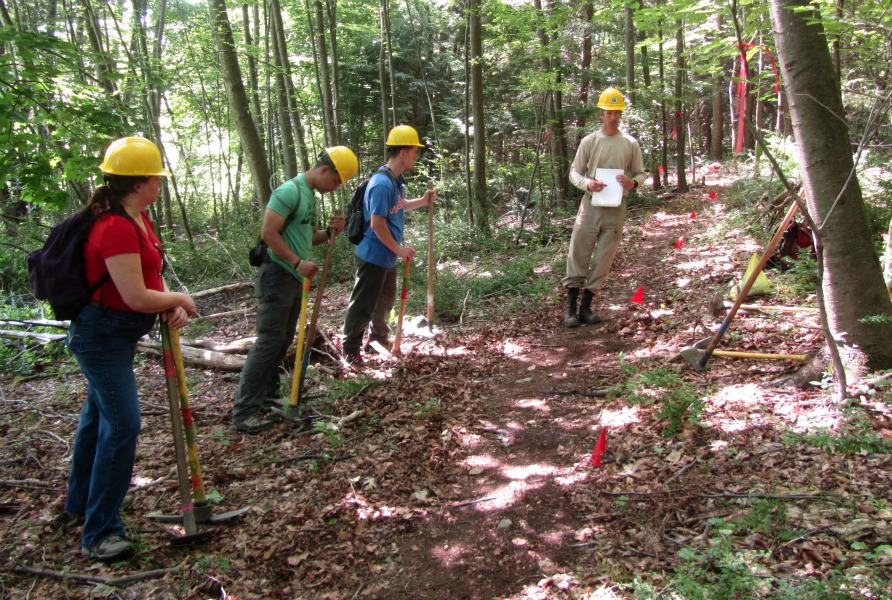 “This project is an example of the right way to get things done,” said Hank Osborn, Trail Conference Senior Program Coordinator. “The reason we were able to accomplish so much was because of the cooperation of the Trail Conference volunteer leadership and local agency partners—especially the Town of Dover, the Friends of Dover Stone Church and the Dutchess Land Conservancy."

The Stone Church Preserve was purchased in 2004 with private and public funds through the collaborative efforts of the Dutchess Land Conservancy, the Town of Dover, the Friends of Dover Stone Church, Dutchess County Government and the New York State Office of Parks, and the Recreation and Historic Preservation. Additional lands and improvements to the right-of-way access were added in 2009, with a grand opening celebration in 2010. The Trail Conference adopted the Stone Church Preserve in early 2014, sharing responsibility for the maintenance and protection of its trails. The Town of Dover and DLC added a key 53 acres in December 2014, making it possible to build and open the three new trails this June.

“Hiking the new trails definitely enhances the experience of visiting Dover Stone Church by juxtaposing the grandeur of the landmark cave with the intricate ecosystem of the preserve that surrounds it,” said Dover Town Supervisor Ryan Courtien. “As with any outdoor adventure, we urge visitors to hike only on designated trails developed for their enjoyment and safety.”

Dover Stone Church Preserve is located in the hamlet of Dover Plains, NY and visitors are asked to park at the Tabor Wing House at 3128 Route 22, or at the Dover Elementary School at 9 School Street (when school is not in session), since there is no parking at the Preserve. Walk north toward the traffic light where a blue and yellow state historical marker designates the entrance to the Preserve’s right-of-way. At the top of the gravel driveway, you’ll enjoy a bird’s eye view of the historic tree-lined lane, which is breathtaking in every season. A quarter-mile walk from this viewpoint will lead you to an informational kiosk containing maps and important information about the Preserve and its history. 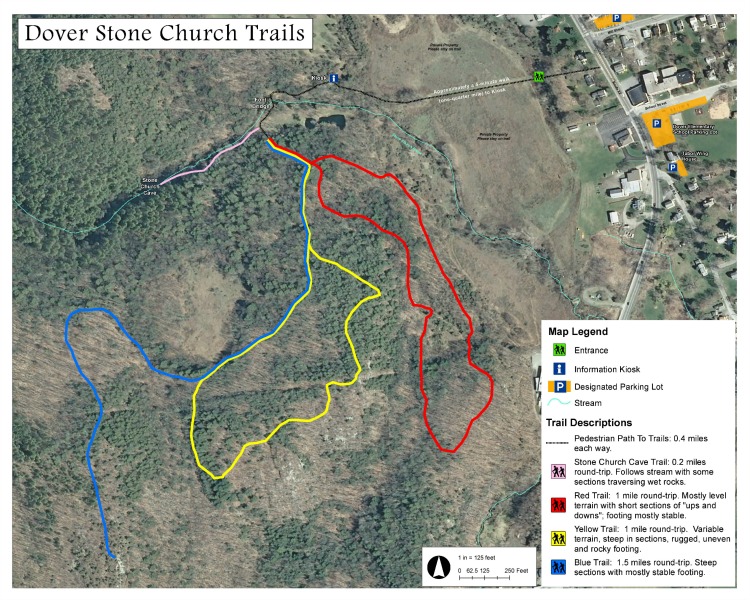 The original Stone Church Cave Trail (0.3 miles round-trip) leads to the centerpiece of the Preserve: the natural, stream-carved cavern known as Dover Stone Church. Large, metamorphic rocks form its entrance in the shape of a gothic church’s cathedral window, hence the holy moniker. Take caution when rock hopping at the mouth of the cave, especially if the water is high. Once inside, you’ll find a magnificent waterfall fed by Stone Church Brook, a tributary of the Tenmile River, that parallels the trail. The unique beauty of this site, which has historical ties to Native American Pequot Chief Sassacus and his warriors, is often likened to something out of a fairy tale.

For a longer tour of the Preserve along hiking paths of varied terrain, retrace your steps back along the Stone Church Cave Trail. In this direction, all three of the new trails are accessed from a trailhead on your right as you near the clearing. The new yellow-blazed and red-blazed trails each provide one-mile loop hike options. The in-and-out blue trail is 1.5 miles roundtrip. You’ll encounter plenty of rocks and several forest types on these trails, from abandoned agriculture land now sprouting juniper trees, to oaks, hemlocks and hickories, to chestnut oaks and pitch pines at the top of the ridge, which offers sweeping views over the Harlem Valley. Many of the habitats at the preserve are sensitive to disturbance, so please stay on the blazed trails.

“The number of people coming to the Preserve has noticeably increased since the new trails have opened, and the comments in our trail log book are overwhelmingly positive—people are really enthusiastic about this place,” said Julie Hart, Senior Manager of Stewardship and Education for the Dutchess Land Conservancy. “It has been great to work collaboratively with so many organizations to create something that is so appreciated by the hiking community.”

Directions:Take NYS Route 22 to Dover Plains. Immediately south of the traffic light at Mill Street (Metro-North Rail Station), look for blue and yellow historic sign on west side of road for Dover Stone Church. The drive is private, but open for pedestrians; do not take cars up it. Parking is permitted at Dover Elementary when school is not in session, The Tabor Wing House at 3128 Route 22, and at Four Brothers Restaurant, all within walking distance.