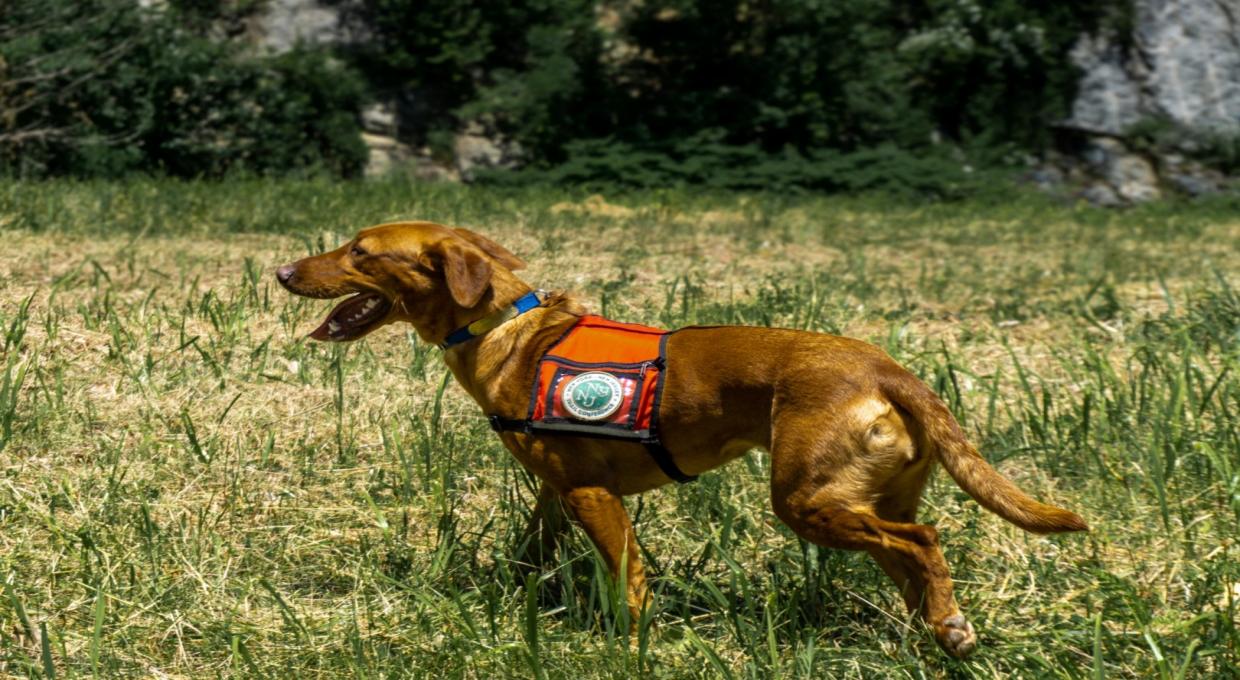 Utilizing their exceptional sense of smell, dogs have been commonly used for search and rescue, as well as weapons and narcotics detection. These tracking and detection skills are now being used to protect our wild spaces. In 2010, the journal Invasive Plant Science and Management published a study that concluded trained dogs could smell and detect twice the number of invasive plants that humans could observe with their eyes.

In a metropolitan region highly prone to invasive infestations, early detection is a key component of invasive species management. The addition of conservation detection dogs to the Trail Conference’s Invasives Strike Force (ISF) will increase both the quality and quantity of our invasive surveys.

Dia, our Labrador Retriever, started her invasives-specific training in November 2018 by learning to detect the presence of Scotch broom (Cytisus scoparius). This species is targeted for eradication by the Lower Hudson Partnership for Invasive Species Management (PRISM), which the Trail Conference manages. Scotch broom typically grows among other plants in the fields through which our trails run; without the help of a detection dog, it can be difficult to spot, making Dia’s nose an important tool in our efforts to control the species.

Our canine handler, Joshua Beese, is training and working with Dia. Josh is an emergency search and rescue dog handler for New Jersey Task Force 1 and FEMA and owner of Painted Dogz training in New York City; he is assisted by volunteer Arden Blumenthal. During their searches together, Dia wears a GPS collar to record the locations of her surveys. Once Dia detects the presence of a target species, our Invasives Strike Force team is called in to manage it. Over time, we hope to train Dia to detect multiple invasive species.

Dia has also learned to detect slender false brome (Brachypodium sylvaticum), an invasive grass that can outcompete existing vegetation, including threatened and endangered species, and harm wildlife populations by altering food sources. Slender false brome has recently been found in Letchworth State Park, and this location served as a training ground for Dia.

And Dia isn't just helping to detect plants, she now also is helping to detect an invasive insect called spotted lanternfly. Spotted lanterfly is a threat to agriculture as well as the environment feeding on over 70 different plant species including apples, grapes, and hops. Spotted lanternfly is established in eastern Pennsylvania and is spreading to surrounding states. Its an excellent hitchhiker on vehicles and other outdoor equipment so Dia has learned to conduct inspections on cars and trucks.

Conservation dogs can learn to detect up to three new species each year, meaning Dia’s incredible talents will continue to develop. “In three or four years,” Beese says, “we’ll be pushing forward the science on what can be done with invasive species detection using dogs.”

This program is funded through donor support and a grant from the New York State Department of Environmental Conservation.

Support the program and wear it proudly: Buy a Conservation Dogs t-shirt today.

By supporting the Trail Conference's Conservation Dog Program, you'll allow us to be at the forefront of early invasive species detection. Donate today!